WARNING!! This is impressive! Be prepared to handle an extra dose of voluminous lashes! 😂

With makeup, freedom is the rule. We are free to wear whatever we want, how we want, when we want! Concerning lashes I love volume. A LOT OF VOLUME. I am gifted with long lashes but not with voluminous lashes. (Ok well we can’t have it all!!). For those who follow me on instagram you could follow my adventure with mascaras, especially with the Marc Jacobs velvet noir  mascara which was for me a huge disappointment. YES, HUGE. Was the first time I actually returned makeup. FIRST TIME EVER. I picked Too Faced Better than Sex mascara instead. This one is way better than  its fellow Marc Jacobs. But would not go that far and call it the best mascara ever. It gives volume with a BLACK black color BUT it tends to smudge a little bit throughout the day. (Like the Chanel volume in extra black…) So when Dior released its new lash primer called Diorshow 3D maximizer I thought it would worth the try.

To be really honest it was when I saw the video they posted on their instagram page. The girl had lashes covered in a thick white coat of mascara and her lashes were impressively voluminous. This primer is actually  the new version of the Diorshow maximizer lash plumping serum. I had the older one and was meh about it. Did not feel any difference and even had an allergic reaction to it. But you know me, when there is something new I NEED to get it!  So I got it, Diorshow 3D Maximizer and its triple volume effect is now mine.

What does the brand say:

What it is:
A lash primer with an air-pumped texture that coats each lash with a dense, lightweight layer to intensify the effects of the mascara.
What it does:
Enriched with Pure WhiteTM complex, this primer reveals the optimal color and intensity of lashes. Its revitalizing oil serum concentrate improves thickness, curl, and the look of lashes for ever-increasing results, application after application.
Research results:
In a clinical evaluation on 31 women after 8 weeks of application:
– Subjects reported 73% more curl
In instrumental tests on 21 subjects, comparison of bare lashes vs. lashes with Diorshow Maximizer 3D and Diorshow mascara:
– Subjects reported 90% more curl
– Subjects said lashes looked 38% longer

It has a silicone brush that catches every lashes and cover them with the primer.

But if you are expecting to get these thick and white lashes you can see in the video you will be disappointed. The formula is not thick at all but covers every single lash perfectly. At the first glance my lashes look longer and more dense. I apply two coats of the primer and thanks to the end of the brush I cover my lashes individually (at least some of them have this luck) to add more density and volume.

Then, It’s MASCARA TIME!!! I decided to try TooFaced better than sex mascara with the primer to see the 3D Triple volume plumping lash primer effect with an already volumizing mascara.

After 3 coats of mascara the result is just crazy! Full fat black lashes very dense at the roots, almost like I am wearing an eyeliner. This combo is amazing for the days when you run out of time and you have to wear only mascara without looking too nude! 😂

I have nothing else on my eyes than 2 coats of lash primer and 3 coats of mascara.

In a nutshell this combo is very good if you want to achieve a dramatic look without using falsies.

After using the primer for more than 3 weeks now  I feel my lashes stronger (I lose way less lashes during my full face cleansing time), they look more dense even without makeup. In other words they feel/look healthier.

About the smudging I can’t tell.. sometimes it smudges sometimes it doesn’t. Still can’t figure out why. Do you have any ideas?

Have you tried this primer? Its ancestor? What do you think?

One thought on “FALSIES? DID SOMEONE SAY FALSIES?”

This site uses Akismet to reduce spam. Learn how your comment data is processed. 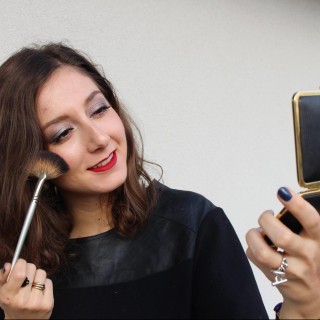 Trending on Beauty By Lynmed